The Apple Butter Cookie strain, or ABC, is more than a silky smooth blend of apple and cream. Goji OG created ABC, and Granola Funk was the daddy. Both with Girls scout cookie background, which gives the apple and dough butter smell.

When growing Apple Butter Strain, it’s best to run with Coco Coir mixed with organic media. She doesn’t do well with synthetics and will thrive in a temp around 78 degrees F.

Apple Butter cookie strain is a pheno of Goji OG, celebrated for its high yield and rich strawberry smell—a pure indica with a very high THC content. The odor smells like sweet berries, and the taste is earthy and smooth. It is challenging to grow Goji OG – it is better to plant in soil because it doesn’t have a very long shelf life if it gets too much light during growth.

If you’ve tried other chem-type strains, you know how hard it is to find something that gives you an uplifting high without knocking you out. Most come on fast but leave you feeling pretty low after your first experience with the strain.  You want to nap instead of being productive or contributing to society in some way that creates positive change.

The OG here, found by some locals in South America (or Tibet), still has its wild nature left intact. And because of that, it doesn’t mind giving you back huge yields every season when put under some TLC (Tender Loving Care).

Mint is a hybrid cross containing Durban Poison and OG Kush. A phenotype of the legendary Girl Scout Cookies strain. Dark green and purple hues show through a heavy coat of crystals. A sweet minty smell explains this strain’s name.

While Thin Mint, technically called slightly indica dominant, the effects are closer to a slightly Sativa. The powerful Sativa effects of the F1 Durban make its presence through waves of euphoria and bursts of creativity.

A patient suffering from depression can relax and calm the mind while not feeling too sedated. The OG Kush shows its true Indica dominance with its sedating body high and overall relaxation.

The Granola Funk is a cross between the Girl Scout Cookies forum cut with Wookie 15. Named after a rainbow gathering kitchen and bakery, this delicious fresh baked, pleasing aroma draws you in. The so-called “Wookie” marijuana line is a veritable terpene factory with pronounced lavender, grapefruit, and diesel tones. One cannabis experience that will flood your senses, helping to remove physical and psychological pain. 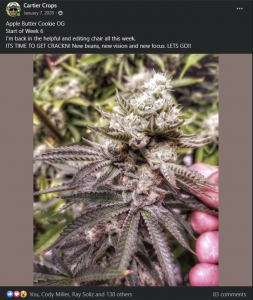